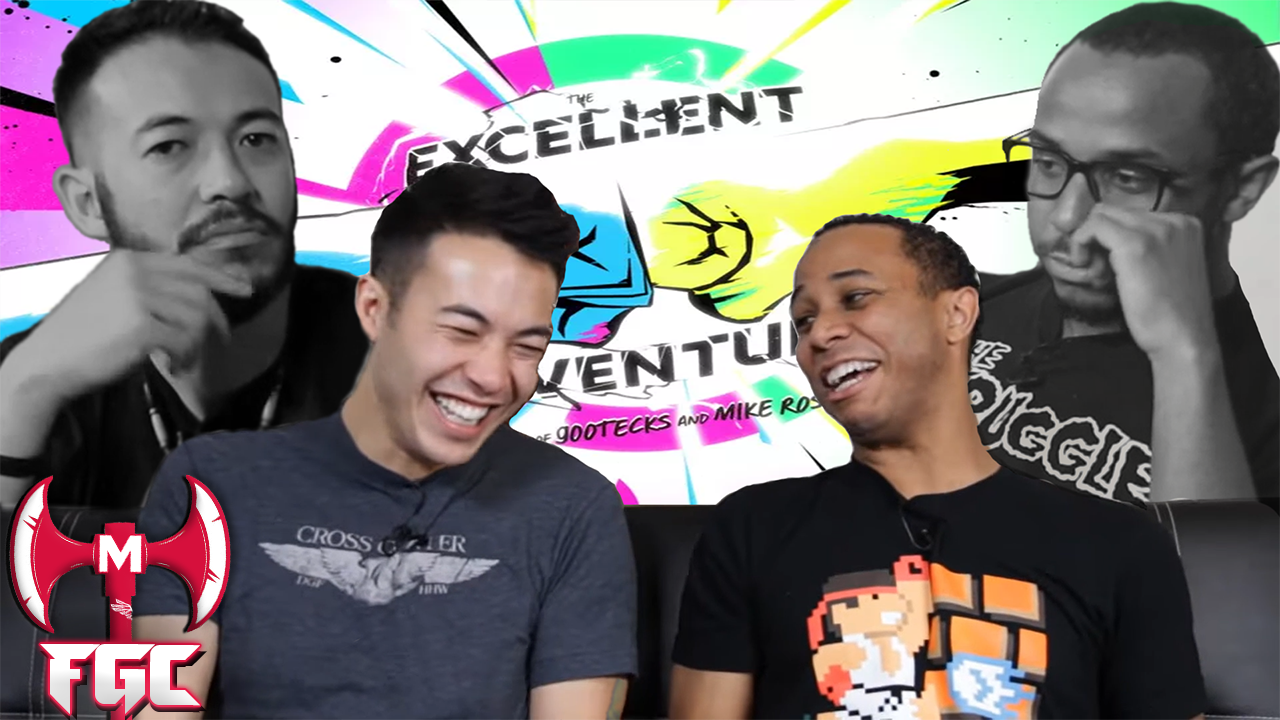 The Rise and Fall of The Excellent Adventures of Gootecks & Mike Ross
Date Published: 27 August, 2020

As arguably the most recognizable pair in the FGC (Fighting Game Community) for years, especially in the modern era, Mike Ross and Ryan Gutierrez played an instrumental role in the fighting game media and content creation spaces.

Though, while the two had their hand in many fighting game related projects, both on their own, and jointly, the weekly fighting game series—The Excellent Adventures of Gootecks & Mike Ross was a show that had risen to the top of the FGC ranks, and held its No. 1 spot for years, yet, ultimately fell down from grace and lost its magic somewhere along the way.

Ryan Gutierrez, more prominently known as Gootecks around the fighting game scene, was a competitive player in the community for many years, making a name for himself predominantly with the Street Fighter series, including games like Street Fighter III: 3rd Strike, and Street Fighter IV, and its many expansions.

Mike Ross, who was also known as a competitive player around the same time, also made a name for himself in the community, predominantly by competing in titles such as Marvel vs. Capcom 2, and Street Fighter IV as well.

With the two Southern California competitors and friends competing during the same time, the two began working together on a show called Cross Counter Live—an FGC centric news and interview focused show airing on theStream.tv.

With Cross Counter Live gaining more traction, especially with its format of including community figureheads, such as Street Fighter legend—Alex Valle, long time Tekken and Soulcalibur competitor—Aris, and many more, the tandem began to gain more of a presence in the fighting game content creating world.

The early days of the two joining forces, did not only include Cross Counter Live, but also saw them appear on the official Cross Counter TV YouTube channel playing Street Fighter IV online in late 2010, the same year Mike Ross placed 4th at what then was without question, the most competitive Street Fighter IV tournament—EVO 2010.

The first few episodes of Excellent Adventures, while minimalistic, captured the unscripted charisma of both Gootecks and Mike Ross, and perhaps most importantly, their chemistry together, all while playing a game they both enjoy—Street Fighter IV.

As the show progressed, the audience saw more into the life and personalities of the two, with spin-off videos such as The Real Life Adventures of Gootecks and Mike Ross, and eventually introduced a camera element, in addition to the gameplay capture, as well as FGC guests to compete online as part of the show.

However, Mike Ross and Gootecks truly began to capture momentum in the year 2011, as Cross Counter TV featured more interviews of fighting game players from around the world, various clips from gaming events and tournaments, as well as spin-off shows such as Marvelous Adventures—featuring Marvel vs. Capcom 3, and The InKredible Adventures—featuring Mortal Kombat 9, to go along with now the firmly established Excellent Adventures—featuring Street Fighter IV: Arcade Edition.

As the years progressed, Gootecks and Mike Ross became staples in almost every big event surrounding the FGC. They would appear on many platforms, some fighting game focused, and some more mainstream. The two had become iconic figureheads in the fighting game landscape.

The combination of Street Fighter IV‘s rising popularity, new titles to feature such as Street Fighter X Tekken, and the constant content innovation which included fighting game lessons and basics tutorials of various games, top local and global player interviews, and the comedic infused theme of Excellent Adventures, the stock of the busy duo only saw an upward trajectory.

With the expansion of content, the Cross Counter brand had certainly made its presence known in the global fighting game community, as seen with it’s widespread reach, demonstrated with Cross Counter Asia, featuring the show Excellent Asian Adventures, headlined by then community figure and commentator Zhi, and top Street Fighter player—Xian.

Fast forwarding to early 2014, arguably the year that truly launched the duo to the top of the FGC, Gootecks and Mike Ross found themselves on the ESGN TV program—Fight Night, with Mike competing on the show and Gootecks broadcasting as one half of the commentary crew.

Following their appearance on Fight Night, the two continued traveling to both national and international tournaments and events, all while still focusing primarily on filming Excellent Adventures, as Cross Counter Live had by then ceased production after experiencing format changes, and exterior factors leading to the show’s instability.

However, perhaps the true launch pad for Excellent Adventures appeared in the form of Ultra Street Fighter IV, the final expansion for the series which came in June of 2014. With the game rejuvenated once again, the duo made the most of the climate, and seized the opportunity by improving production for the show, introducing more guests, and implementing a subscription based model for the whole show, rather than waiting for the weekly episodes.

By the year 2015, it was without question that Gootecks and Mike Ross were at the center of the fighting game community’s attention. With the rise of the show, Gootecks would continue pushing additional content on the Cross Counter YouTube channel, and Mike would take a position at the live streaming juggernaut—Twitch. It would seem as the two arguably saw their professional peak arrive during the same time.

What Goes Up Must Come Down

The success of Ultra Street Fighter IV translated itself to mass success of the fighting game community, as Capcom’s fighting game division was in the FGC’s good graces, tournament numbers rose, and the platform for fighting games grew, which inherently only aided the Cross Counter duo.

By late 2015, Mike Ross had already begun his second season of being the host of Capcom Pro Talk—a Street Fighter centric talk show featuring guests airing weekly on Twitch. He was also still fulfilling his role as a fighting game ambassador for Twitch, his duties with Excellent Adventures, and promoting the FGC on other major media outlets.

Gootecks would continue his work on the Cross Counter YouTube channel, as well as organizing fighting game get-togethers such as Bar Fights, and fulfilling his commentary roles while traveling for tournaments.

However, the beginning of the end came sooner than anticipated, in somewhat of a surprising fashion. Coming off the heels of one of the best year’s Street Fighter IV had experienced, with back to back grand showcases at EVO 2015, and Capcom Cup 2015, Street Fighter V launched in early of 2016 after mixed reactions post beta tests.

Throughout the year 2016, Gootecks and Mike Ross continued on as usual with their combined and separate efforts in the fighting game landscape, however, the ultimate undoing of the Excellent Adventures crew was brought on by the same factor that made the tandem so entertaining, their transparent feelings.

By the end of 2016, Mike Ross had left Twitch, along with his role as Capcom Pro Talk’s host, and the Cross Counter YouTube channel had seen a decline in viewership despite Gootecks’ efforts to collaborate with other fighting game players and creators for various content.

Though Street Fighter V‘s polarizing status in the fighting game community notwithstanding, the most arguable reason for the decline of Excellent Adventures at the time was simply the apparent fact that the duo was no longer genuinely having fun while playing the game.

Despite efforts to keep the show going, the passion that was once present had left the famous Excellent Adventures set, especially one the side of Mike Ross, as he often could not contain his disdain for the game, and his overall disinterest in fooling the viewer that he was enjoying his time.

With the heavy decline in numbers in comparison to what was the norm during the Ultra Street Fighter IV days of the show, as well as an apparent lack of passion displayed at times by both the Gootecks and Mike Ross, the final nail in the coffin appeared in early June of 2017, when Mike Ross announced he was leaving the show, as well as the FGC.

In the wake of Mike Ross taking an indefinite hiatus from the FGC due to his personal displeasure with how the current “esports” times are treating the FGC, it did not take long for Excellent Adventures, as well as the entirety of Cross Counter’s content to lose resonance with the fighting game community.

Despite Gootecks’ attempts to keep the show alive, regardless of the guests, or ensemble cast, resurrection efforts were futile. Cross Counter did experiment with different shows that model the old Excellent Adventures format such as The Recipe which featured Tasty Steve and Sajam, as well as The Reads featuring Scar and Toph.

Although the new shows did receive positive feedback both from the FGC and the Smash community, they ultimately ceased filming, leaving Gootecks to experiment with other ideas such as The Untitled Esports Show, a form a video podcast discussing esports and the FGC, as well as various lesson and training mode streams mostly relating to Street Fighter V.

Meanwhile, during the same time Gootecks was attempting to rejuvenate the Cross Counter name, Mike Ross had kept a low profile, with very few online interactions, few being a Reddit post which delves a bit deeper as to why he decided to remove himself from the FGC, and then later somewhat of wasted podcast appearance on the EventHubs Podcast.

Moving to present day, as of late August 2020, the last upload seen on the Cross Counter YouTube channel is of Gootecks somewhat anxiously talking to his audience about his life in quarantine, and his past in the FGC and experience as a content creator.

Mike Ross has continued to keep a low profile, with only a handful of FGC related showings, one being a tournament appearance, and others being FGC commentary of sorts. He is currently seen occasionally streaming Dota 2 on Twitch without a camera or microphone.

Gootecks and Mike Ross were two figures in the FGC whom at one point in time, everyone knew, especially in the United States. It was their chemistry as a duo, along with the assistance of a popular game in Street Fighter IV, that truly saw their status in the fighting game community rise.

Although the FGC’s landscape is entirely different now compared to a decade ago during the rise of Excellent Adventures, it should be noted that the work both Gootecks and Mike Ross put into the entertainment landscape of fighting games played an instrumental part in how current content creators approach their own craft.

They may have fizzled out, as any flame does. However, it is arguable that at one point in time, at least in the world of fighting games, Gootecks, Mike Ross, and Excellent Adventures was the hottest thing around.