Lessons Learned From Girls of the Wild’s
Date Published: October 15, 2016

NOTE: This write up contains spoilers in regards to the manhwa series Girls of the Wild’s.

There are a lot of moving parts in Girls of the Wild’s which consequently showcase many different themes to be conscious over and learn from. Characteristics such as confidence, trust, and overall self-growth are all there, but it’s up to the reader of series to decide whether to read between the lines and delve into these themes more thoroughly.

In the early going of Song Jae Gu’s (Jae Gu) character development, we see that he holds a lot of resentment towards people who’ve harmed him in some way in the past, bullying and living rejection were factors, but the issues were primarily derived from the sense of abandonment after his mother left him and his siblings. Jae Gu was never really able to develop as a person because his thoughts and mindset always lingered on his past, as a result holding him back from ever growing as a person. It wasn’t until letting go of his resentment and shedding the fear of opening up again, that Jae Gu finally became happier with who he was as a person. 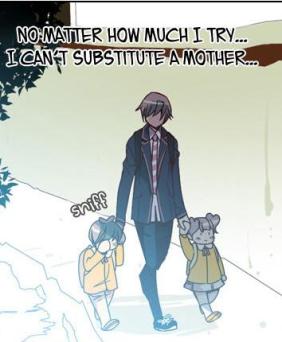 This trait shows itself in many of the series’ cast, however its most glaring with Jae Gu. There will always be a sense of doubt when trying anything new, its human nature to fear an outcome that is unknown. Despite that, characters like Choi Dal Dal (Dal Dal) and Lee Moon Young (Moon Young) manage to get past the doubt and move on forward, yet in Jae Gu’s case, the doubt would tend to overcome him, eventually leading to a self-deprecation, lending him to suspend in the vicious thought circle of “I can’t do it, might as well not try.” Getting past the issue alone proved to be too difficult for Jae Gu, though, after meeting and befriending the likes of Dal Dal and Moon Young, and the insertion of a little self-confidence, Jae Gu managed to prove to himself that he could get over the hump.

Jae Gu standing up for himself against Han Gyul. 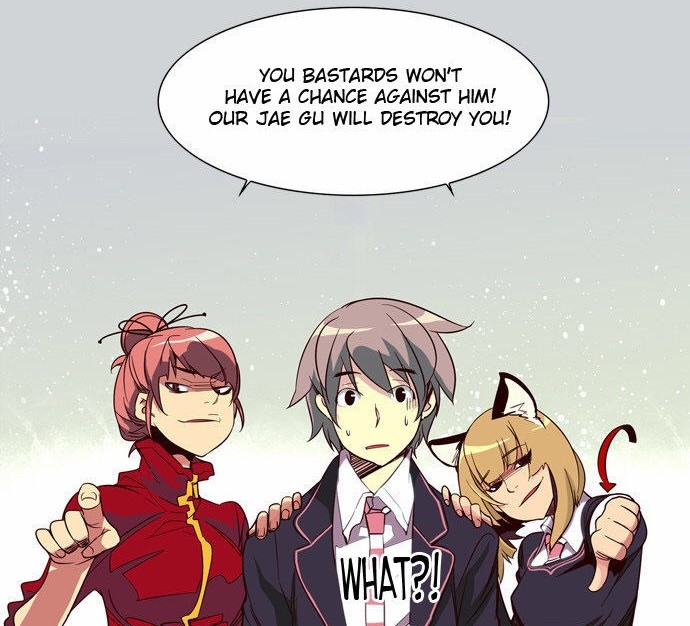 Moon Young and Dal Dal calling out anyone who is wanting to hurt Jae Gu.

When the entire school is famous for long running tradition in producing mixed martial arts champions. Dedication isn’t a new concept the likes of Dal Dal; who has dedicated herself to Tae Kwon Do, becoming a champion despite her smaller stature. Moon Young; who is a boxing gym rat, winning the Wild’s Tournament by relying on her work ethic and dedication rather than natural given talent. As well as Yoon In Gyi (Queen); who won the Wild’s Tournament multiple times. Jae Gu’s newly found confidence aided him in training, impressing not only himself, but grabbing the attentions of his friends. The dedication he put forth into his training in preparation of the Wild’s Tournament eventually led him to take revenge over his long time bully, as well as cementing the fact that he is no longer his old fragile minded self.

Jae Gu being oblivious to his surroundings is possibly his most frustrating characteristic. An unassuming nature is one thing, but not being able to take a hint, no matter how direct, gets old quick. Whether it’s the subtle and not so subtle advances on the part of Dal Dal to Jae Gu or realizing a change in mood or atmosphere within the group, Jae Gu being the main culprit of this, the rest of the cast also has their foggy moments. Not being able to take in the situation around you only will further complicate the situation, so making sure to pay attention to details necessary trait.

5. Complete selflessness can be as detrimental as complete selfishness.

Not thinking about anyone else but yourself is definitely a bad habit that distances people away from you, on the other hand the same outcome can happen when thinking only about others and never yourself. Although there are some examples of selfishness in Girls of the Wild’s, none are extreme. However, selflessness does reach the extremity in Jae Gu, he never wants to offend or hurt anyone, always finding himself in the middle while those around him stand firm on either side. This trait in Jae Gu never really dies down as demonstrated by some of his actions, one example being the rejection of both Queen and Dal Dal after they both shared their feelings with him. The choice could have been seen as selfish, as he did not want to make a decision, or on the contrary, he did not want to pick one, resulting in hurting the other, thinking that if he rejects both, they may find some solace in the fact that neither lost out to the other, but were equally rejected. The other example of Jae Gu’s selflessness was during Dal Dal’s kidnapping rescue mission, Jae Gu almost single handedly solved the case of her whereabouts and rescued Dal Dal from her captors, yet decided to step back, not showing himself to her as soon as he saw that she okay. Ultimately, with both selflessness and selfishness, too much of one and not as much of the other can backfire so it’s important to find and maintain a balance for both.

Jae Gu leaving without seeing Dal Dal after rescuing her.

Dal Dal deep in thought after taking her rejection from Jae Gu.

Being honest can sometimes backfire, however you’ll never be the one firing the shot. Jae Gu, Queen, Moon Young, and seemingly everyone with an exception of Dal Dal, have had a hard time with being direct when it comes to more complicated matters. Queen’s fault of not sharing her feelings earlier, sending mixed signals to Jae Gu and his already unassuming nature, only further confused him with what their relationship has become. Jae Gu’s how he feels about everything escalated the love triangle even more, and lastly Moon Young’s silence regarding her true opinion on how and what she feels is happening with the group, led to even more awkward encounters. Dal Dal’s sincerity was definitely refreshing to see as she seemed to be the only one who knows what’s on her mind and isn’t afraid to say it. It may not always work out the way it was envisioned, but being direct is a simple way of finding out what really is on the mind of others as well as it shed the weight that’s been on yours.

This lesson isn’t exactly shown in Girls of the Wild’s, but there are definitely elements that dance around it. Jealousy and dissatisfaction are usually the motives associated when looking elsewhere for something better. Jae Gu and the rest of the cast seem to be impressed when shown things they don’t have, like Queen’s luxurious lifestyle, however jealousy or unhappiness is never seriously expressed, but more so in a joking matter on the part of Dal Dal and Moon Young.  In the case of the love triangle between Jae Gu, Queen, and Dal Dal, there is less dissatisfaction with Jae Gu but rather the sense of competition between the two girls vying for his affection. The grass greener effect seems to come in when Queen inserts herself into the triangle after what insinuated to be a developing relationship between Dal Dal and Jae Gu. Jae Gu never considered Queen being a better option than Dal Dal, however, her mysterious ways and “unattainable” image hinted to be the cause of his attraction to her. It’s not a bad think the neighbors grass is greener than yours, however, the lesson should be to take care of your grass better, not plant a garden on someone else’s.

Dal Dal telling Queen Jae Gu got in trouble because of her.

Queen and Dal Dal meet in the ring to settle things.

8. Don’t take others for granted.

The unfortunate tale of you don’t know what you have until its gone. Jae Gu’s indecisiveness ultimately came back to hurt him in the end. Only in the aftermath of the love triangle dispersing, Jae Gu finally understood that the company of Dal Dal was something he cared for more than he actually realized. Queen’s prolonged absence also affected him, as he began to reminisce about the fun they all had together as a group. It’s only when something is no longer there that you begin to appreciate having it, always having someone to fall back on when things don’t go your way is a valuable thing and when they are gone, the absence is certainly felt.

The final lesson learned from Girls of the Wild’s is very reminiscent of the first. The lingering on the past factor comes into play as Jae Gu replays his decisions over and over in his head after the rejection of both Queen and Dal Dal. However, he eventually learns that it may not have been comfortable to do, and the result isn’t one he particularly enjoys living with, but he finds a way to just keep going and move on from it and that’s the only real option at the end of it all. Whatever actions were taken, favorable or not, it’s important to own up to them and deal with the aftermath, feeling down will not solve anything, and although it might take time, dusting yourself off and marching on is the best option to moving on. 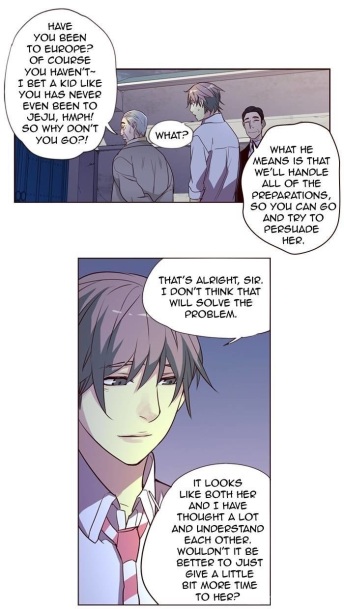 Jae Gu talking to Myung Hwan, eventually asking him to watch over Dal Dal, as he decides to step back for good.

As I mentioned at the start, these are the lesson I took from Girls of the Wild’s, the series is not finished yet and there very well may be other undiscovered themes down the road, but these 9 were the ones I decided were important enough to write about.

Lastly, Girls of the Wild’s is by no mean the perfect series, it runs into problems like any series does, however I thought it was good enough to provoke thought and inspire me to write about it, and any medium that manages to do that is considered special in my book.